One morning after pumping iron, I made a pit stop in front of the mirror on my way to the shower. I couldn’t help but turn to the side and flex my arm to see how big I could get my bicep to bulge. I was Hulk Hogan, at least in my own eyes. I fantasized about taking the world by storm in the upcoming basketball game. There’s nothing more delusional than the ego of a 16-year-old guy. 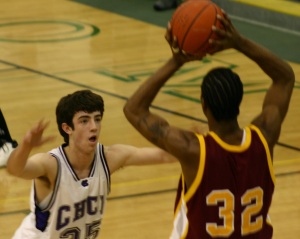 Unbeknownst to me at the time, guarding future NBA star O.J. Mayo would not be the pinnacle of my life

Kicking off in stride in college allowed me to see what else I could set my sights on: the business world. Through a great internship, “saving every dollar for a future of success” became my mantra. I meticulously kept tabs on my bank account each time something entered in. I was putting my hope in my mind and determination to maximize my ability to make money. My professional career was just around the corner.

Until both rugs were simultaneously ripped right out from underneath me.

With a suit and a nametag, I thought I had all I needed

Paralysis gave me the ultimate wake-up call. No longer could I rely on my own independence to accomplish the tangible success I had already experienced. Having no control over my limbs, embracing my inner athlete was no longer feasible. Every dollar I had ever earned disappeared in an instant when I was airlifted by helicopter from the side of the highway.

Something was missing and I could not pinpoint it. I knew it went well beyond my physical inability to move. I continued to look elsewhere, holding material things supreme to everything else in my life.

No matter where I looked, nothing seemed to fully satisfy. There was never any peace around decisions I made or how I spent my time and energy. I was bowing down at the altar of sports and money, among other things, and I was forced to realize I was not going to find ultimate worth in any of those places. It was time to look elsewhere.

I’ve noticed that as hard as I try, I cannot find the satisfaction I was looking for anywhere other than in the person of Jesus. Jesus makes it clear that He came to give abundant life (John 10:10) and that the peace He offers is not in the form that the world offers (John 14:27). Sports, alcohol, or Internet perusing may provide a momentary buzz or distraction from the reality I am facing but will ultimately leave me disappointed in the end. Whether it’s food, money, drugs, sex, fashion, etc., the world has a way of offering us goods that we often believe will bring ultimate satisfaction or ease the pain when, in actuality, they are so fleeting and temporary. Tim Keller refers to these empty outlets as “counterfeit gods.” In his book by the same title, he states, “Counterfeit gods if you fail them will never forgive you, and if you get them will never satisfy you…This is the only God that will: Jesus and His resurrection.”

Any time I attempt to run towards something else, I want to be reminded of this truth. In this raw, thought-provoking video, Jefferson Bethke puts it this way: “When was the last time the world promised satisfaction and actually came through?”